Blog Your Blessings: A New Addition to my Family

By SandyCarlson - September 08, 2010
Things happen after a glass of wine at the end of a long and rewardingly tiring day. Things you just don't regret next day when the light of dawn nudges you awake.
One of those things happened the other night, when I grew our family by one.
His name is Lennie.
He lives on Topsail Island.
He's never said a word to me, but I love him all the same--so much that I have made him a part of my family. Like I said.
The picture is now happily complete: we have a turtle in our clan. A Kemp's ridley sea turtle, to be exact.
Lennie is a permanent resident of the Karen Beasley Sea Turtle Rescue and Rehabilitation Center on Topsail because he is blind. He is blind because a fisherman who found the turtle in his net beat this endangered little guy about the head, destroying sight for Lennie.
Why would anybody do that?
The turtle hospital needs resources to continue its work, so Della and I made a donation toward Lennie's needs to keep him going a while longer. He's family now, so we'll be back.
I told my students I adopted the turtle--and that I did so, with Adella's blessing, in the name of my students. They wanted to know when he was coming to school and if it was anything like adopting a dog because when you adopt a dog they come home with you.
They wanted to know more about Lennie and, back to the question, why would anybody beat a turtle in the head?
Why, indeed? I asked.
The answers from the clear-eyed and innocent: They're stupid. They're mean. They're mad they had a turtle and not a fish in their net. They're tired. Stupid, mean, mad, tired.
Is it right to beat on someone just because he's in your way or things aren't going your way?
Saith the children: Hell no!
Nobody deserve meanness for having the wrong answer or for being the wrong answer.
The last question of the day, which was the first one, if turtles are anything like dogs: When do we get to see him?
In spirit, Lennie swam to Watebury today, and it was cool. These kids would give him back his eyes if they could. 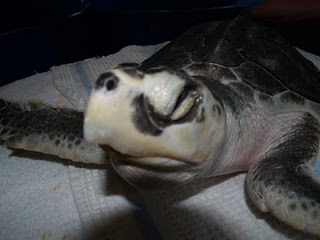 Thanks for being here.